Gretna Campbell was an exceptional painter, known for her powerful landscapes.  On the occasion of the exhibit entitled, “Paintings from Great Cranberry Island”,   held this summer at the Courthouse Gallery in Ellsworth, Maine  it is appropriate to appreciate her beautiful paintings and to recognize her influence as a teacher.

Many Bowery members and friends of the Bowery studied with Campbell at the Philadelphia College of Art, The New York Studio school, and at Yale in the 1970’s through the late 1980’s.  The stories and fond memories are numerous. They  highlight the fact that she was an influential teacher who helped an entire generation of young painters find their footing.

Just a little background: Gretna Campbell was active as a painter and teacher in the late 19040’s through late 1980’s. She was part of an elite group of painters  in NYC, who had been  influenced by the Cubists ,  and the abstract expressionists but who were  most firmly grounded in figurative  expression.  Martica  Sawin, the well-known writer and critic,   who wrote the essay in the catalog  for the  Campbell show,  has a strong interest in this generation of  painters. She  says that they understood the importance of the abstract structure in  their paintings. They had an underlying sense of the abstract form and onto that was placed their  “Painterly representation”.    Campbell herself would say that a painting needed to “work abstractly”,     however,  the perceived  and experienced world was the  main motivating force in her paintings. She was the first to admit  that she painted landscapes because she loved being outdoors!

Sawin notes,  ” To look at a Campbell landscape is to feel the pulse of nature, a living, breathing amalgam of interacting parts, whether she is representing  a cascade of rocks tumbling toward the sea or an impenetrable thicket  of undergrowth or a sweeping vista across the reflecting surfaces of tidal pool toward a distant shore.   Her ceaseless efforts to reconcile the contradiction between representation and abstract structure keep her paintings charged with an enlivening dynamic”.

Here are some of the memories/ stories that her former students and colleagues tell:

Artist,  Naomi Nemtzow shared a sentiment that I heard over and over again: “ Most of all … I remember Gretna for her warmth, encouragement, patience and overall positive approach toward young painters. She was inclusive rather than exclusive. She was passionate about painting but also came across as calm and centered. Those qualities were wonderfully helpful to me and I am eternally grateful to her.” 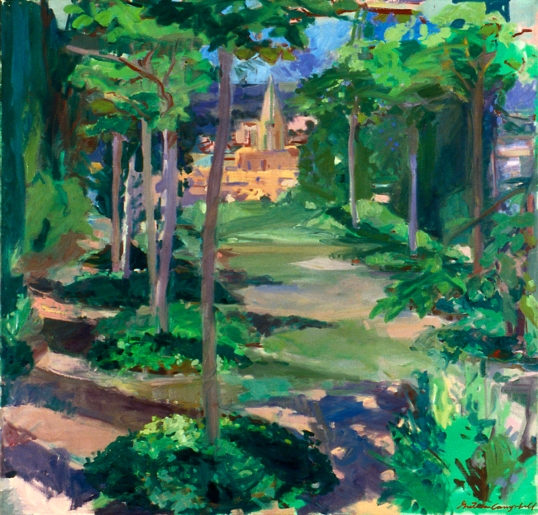 Bowery member, Stephanie Franks, studied with Campbell at the NYSS and shares this memory:

“One very important moment stands out for me. It was my second year at the NYSS. Gretna walked into my studio where there were various paintings in progress.  There was a big abstract painting (based on a still life) in my studio that I had just finished. I had gotten a lot of attention at that time from various faculty members because apparently it was very strong in a formal way. I did not really understand why it was such a hit. There was also a modest size painting of a chair that I had recently done. I liked this one a lot because it felt personal, rather than just formal. Gretna came in the studio and immediately picked out my chair. None of the other teachers said anything much about that particular painting, only Gretna. She liked it for its personal qualities. That meant a lot to me.  Gretna was able to see the individual and personal voices of her students. She would coax and champion those voices while training her students in a way that would give them a solid foundation, not just in formal concepts, but in the nitty gritty of how to use our materials to create gradations of values for example, and so on. This was the sort of thing that wasn’t taught much at that school at that time. Gretna was a force of groundedness, clarity and compassion for her students. Gretna was tough, sweet, full of integrity.” 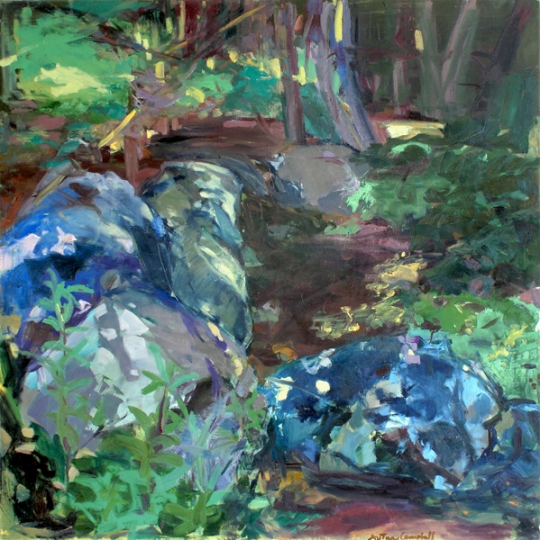 Mark Lewis,  shares this memory:  Many years have passed since I spent time working with Gretna —- but I still remember her support and presence.  She was such a passionate painter.  She loved sharing observations on painting and her thoughts on painters.  I thought it was interesting – she wasn’t afraid to use the word beautiful when talking about paintings from history or even student work– it seems funny now but I think teachers were afraid to use that word at that time.  I loved her independence and passion for painting and of course her passion for the landscape.  Once she proposed the idea of painting the landscape utilizing a color structure composing color as a major and a minor chord – as a student it’s nice to have these sorts of ideas to contemplate.  I wish I could share my work with her now after all of this time.  I’m very happy to share her work with my students because it is beautiful.  I have a postcard of Wild Wheat Field next to my desk – what a wonderful painting – one of my favorites.  Gretna is a wonderful painter. 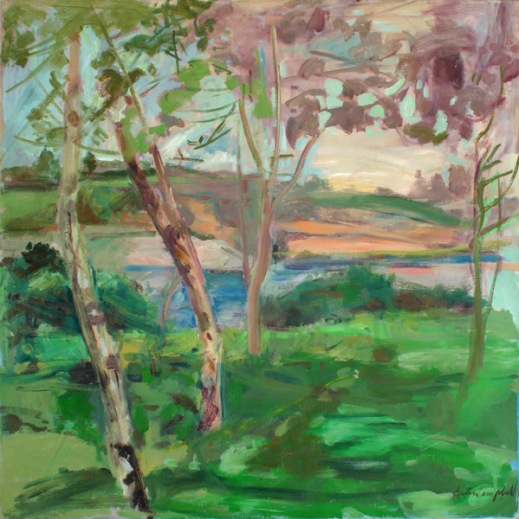 Artist Don Kimes  shared this: “Gretna was my teacher and mentor.  Knew her very well.  I also shared a painting class with her for several years while I was Program Director at the Studio School.

Gretna and I were doing a joint critique with some of our students and I was rather harshly criticizing the work of one of them.  Gretna joined in the conversation – for her they were more like painting conversations than critiques – and she pointed out a small section of the painting. She said to the student that they really had something going in that little section, that they could learn a lot from what they’d done there.  After the student left Gretna said to me “you know, no matter how bad it is, you can always find one thing that is good.  That will give them something to hang on to when they get back to the studio.”  I’ve been teaching for 37 years now, and that simple statement is still one of the most profound things anyone ever said to me about teaching.  It has been central to everything I’ve done since then as a teacher.

This memory comes from Janet Gorzegno: “Gretna Campbell was my teacher when I was a student at the New York Studio School and later at Yale School of Art. In these settings, Gretna’s voice was distinct amid an array of luminary artist-teachers. Her manner was real, smart and wholehearted. She bestowed insightful criticism with honesty and compassion, imparting her painter’s wisdom in accordance with what her students could receive.

I remember a group critique at the NYSS where Gretna responded to one of my early still life paintings. I was grappling with a composition involving forms interacting on a shallow horizontal ledge. I had modified the straight edge of the ledge to bend at an arbitrary angle to heighten an emerging motif of triangles. Gretna noted the bent ledge and commended my painting for its unique take on the set-up. She was also quick to add (something like), “Don’t the rest of you go do this now; only Janet can do this, in this particular painting, at this particular time.” Gretna could see that in the process of painting I had stumbled on something visually interesting, and she wanted me to see it too. She also wanted me to be clear that while my design had some merit, it was my job to consider how I got there. Gretna taught the compositional basics, and knew the rules were made to be broken, but ultimately she emphasized that each student must discover her own way.”

Nearly everyone told me the “baked potato in the pocket story”.  Here is Janet Gorzegno’s recounting: “I tell my art students a story about Gretna that reveals her dedication to her painting and how creatively pragmatic she was. She used to bake potatoes, wrap them in foil, and nestle them in the pockets of her coat to use as hand warmers during her winter painting sessions.  I think of this whenever I view one of Gretna’s winter landscapes, and her brushstrokes as they dance across snow covered branches and fields.  It is especially fitting and endearing that after her painting sessions, Gretna ate the potatoes for lunch!”

Grier Torrence shares this memory:   when I studied with her at Yale in 1980 ….  she told me about the potatoes in the pocket too, and talked about standing on a wood board instead of on the ground. This keeps your feet warm when you are painting outside in the cold.   She also suggested that I use flake white (rather than titanium) to give the colors greater luminosity, a transparent quality that allows the color to sing.   Those were practical and technical tips but what mattered most was her sense of her caring.

Sadly Gretna Campbell  died young at the age of 65 in  1987 . There was a well attended memorial service that November at the Quaker Meeting House in NYC

Torrence says , ” I was thankful, at her service, to know that so many loved her… Many felt encouraged by her generosity.  Many recalled painting with her…  Lots of students from Yale and from the Studio School attended, and many fellow faculty and friends including Bernie Chaet, Gabriel Laderman, Natalie Charkow, Rackstraw Downes, and Bill Bailey.  There was a deep and fond feeling for her and perhaps we became more like her in her humanness”.

“Many years after I studied with Gretna, her son Henry told me something very nice that she had said about me when we were in graduate school.  Hearing that several years later was encouraging again, a kind of post-humus boost”.

The on-line web site and forum for painters, Painting Perceptions featured GRETNA CAMPBELL in this posting:

Many thanks to everyone who contributed to this blog :

And, special thanks to artist  Henry Finkelstein , who graciously provided the images for this blog.