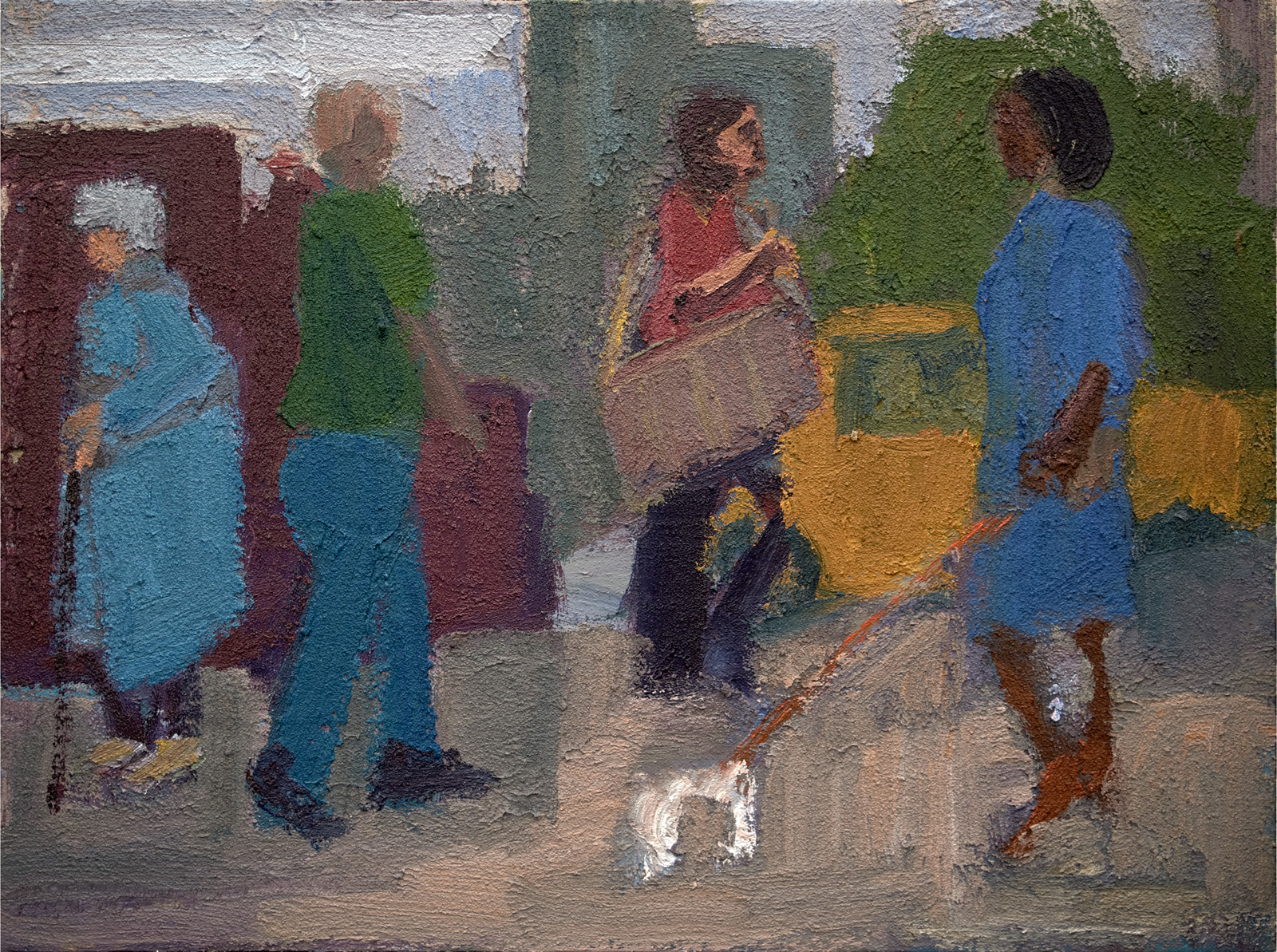 Leonard Schwartz has written about Carr’s paintings. Here are excerpts of his review.

A child raises its hand to point, gesture, or reach. This figure does not appear in all of Simon Carr’s recent paintings but it appears in some of them, and is a key to all of them, since it is suggestive of the persona of the painter…… the painter, that creature entirely dependent on hand and eye, open to wonder as primal and as refreshing as the child.

There are no eyes in these paintings, or at least very few of them, and then they are only suggested. The face, even, gives way to the largesse of the head and, I want to say, the palpability of the soul. Thus, the subtle movements of a child’s hand- or a painter’s hand – become paramount.   The hand, like the eye, comes before language.

To an extent,  all of Carr’s paintings encourage a certain incarnation theology, a certain immanence in form, a certain sense that ancient patterns are being enacted freshly, as if for the first time.   Exchanges, as that between child and golden retriever or child and glass and bakery workers, are imbued with that of a secret recognition – to which other figures are blind, even as we might be blind to the sides of those figures lost in their own shadows or murk or depth. 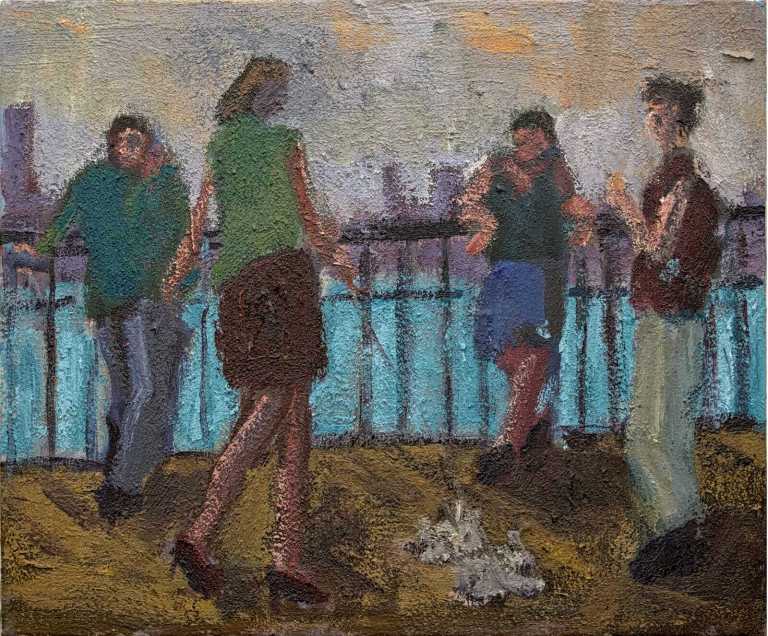 Bakers, glass, and a child in blue; dog walkers, golden retriever, a child in green: in Carr’s paintings things don’t exist in themselves, they are created in the relations between them, bringing us to the threshold of narrative without ever resolving into some definite and limiting story, the mystery of the visible inviolate. The tangle of hand and leash, but also of invisible connections and pulls, creates a thicket of suggestion. 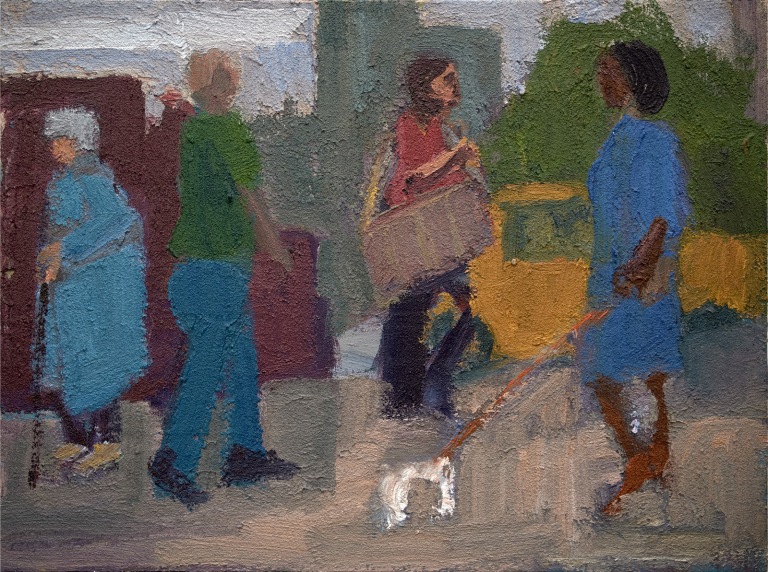 In his The Greeks and the Irrational the classicist E.R. Dodds wrote about “the partial vision of the living”. What we are blind to suggests something about the preciousness of the visible, while the potential for total blindness creates the sense of an actual visual unity, as if to say if it could all go away it must all now be here.

These cross-currents of visible and invisible, light and blindness, ignorance and divinity, the peripheral and the central, illuminate and shadow each Carr canvas.  Town and country, horse riders and horses, the ever present golden retriever, bakery, hair salon and most of all dogs being walked along the Hudson River at the edge of the West Village by their respective people, all reveal theological urges.  And even the scumbling in the paint suggests that we are dust, and to dust we shall return… but suggests it without despair.

The child, New Testament-like, doesn’t know about the dust yet, and not knowing it, can’t even think of accepting such, or even accepting the taint of reading, because the visible is all. The child, like the painter, desires; the child, like the painter, recognizes; and the world yields to that child’s simple gesture. Pascal wrote, “The soul loves the hand”.    And then there is Montaigne: “We do not command our hair to stand on end or our skin to shiver from desire or fear; the hand often goes where we haven’t sent it.”

So cityscape meets bestiary. Police officers, mothers, children, dog walkers, bakers, all have hands: horses, dogs, and birds all do not. The city, created by our hands, encircles the animal in its midst, to which the animal, including the human animal, the animal with hands, the child discovering its powers, responds by tactile negotiation. The being of hands is in question. Birds take flight.  These are scenes of the automatic, not the expressive, the ordinary, not the dramatic, in which truths reveal themselves, not spectacles. They offer up several thresholds at once. Just so, in each painting, I trust in Simon Carr’s hands. 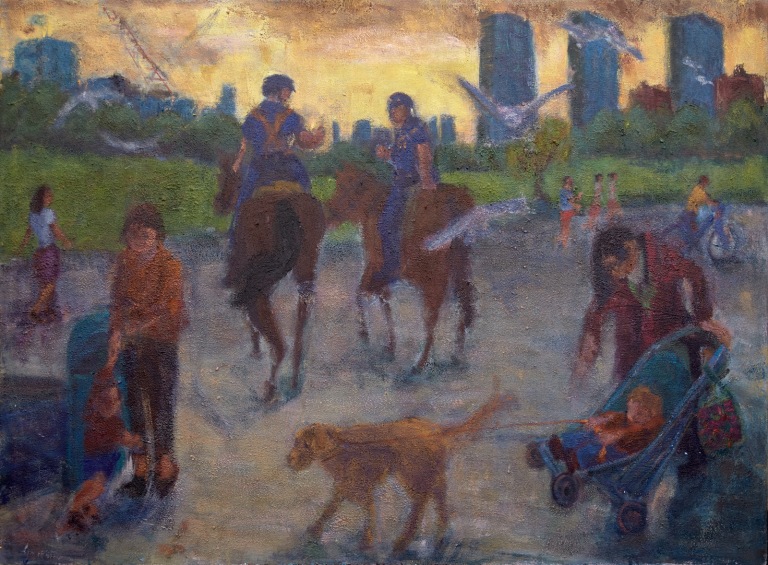 Leonard Schwartz’s collections of poetry include IF (Talisman House), At Element (Talisman House), The New Babel: Towards a Poetics of the Mid-East Crises(University of Arkansas Press), and the forthcoming Salamander: A Bestiary, with prints of wood cuts by Simon Carr (Chax Press). He hosts the radio program Cross Cultural Poetics. A review of his book IF can be found athttps://jacket2.org/reviews/vagabond-imagination … About his work Richard Foreman has written: “Leonard Schwartz’s poems rip apart the organizations of language and experience, allowing those separate realms to collide in ways that give a new electricity to both. His writing is the strongest possible example of a contemporary poetry that makes thought into something sensual, something caressable, enlacing with the reader’s lust for those parts of his mind into which he hasn’t yet ecstatically tumbled.”

One of Leonard Schwartz’s poems is featured in the March  issue of Brooklyn Rail.  http://brooklynrail.org/2017/03/poetry/Leonard-Schwartz-2017

In Conversation with Thaddeus Radell

There is a review of the  recent Westbeth show written by acclaimed critic Martica Sawin in westviewnews.org