In 2019 Bowery Gallery celebrates the 50th anniversary of its founding in 1969. This blog honors the pioneering artists who were early members of the gallery.

In the mid-1940’s and early 50’s Abstract Expressionist art emerged as a new and expressive form of painting.  This was the first specifically American art movement to achieve international influence resulting in a seismic shift of focus away from Paris and to New York.

In the early 60’s  Pop art, the “happenings”, minimalism and conceptual art came on the scene but many young artists coming out of art school were choosing  figurative painting as their means of expression.  John Bradford says, “It was a great time to be a young artist in New York. There were teachers and mentors who had been participants in the 40’s-50’s scene: the Cedar bar, the artists’ club, and later the Hoffman school and the 10th street co-ops. Multiple directions abounded, but these artists tacked to their studio walls pictures by Titian, Cezanne, Balthus, Giacometti, and Beckman, not ones by Warhol, Smithson, Close, or Ruscha”.

(Regarding the 10th street co-ops which Bradford mentions, fourteen early galleries were featured in an outstanding exhibit at NYU’s Grey Art Gallery in 2017: https://greyartgallery.nyu.edu/exhibition/inventing-downtown-artist-run-galleries-in-new-york-city-1952-1965/  )

The new wave of young artists understood the importance of having their work seen. Sam Thurston, an early Bowery member says, “We all felt we were ready to get on the stage and an artist-run gallery, whether as a stepping stone to an uptown gallery or as a way to help us develop, was the obvious step”.

Thurston shares this memory, “I think the idea of organizing a co-op gallery first sprung up between Howard Kalish and Larry Faden one night when they were working at their job unloading fruit at the truck warehouse on the Hudson dock near Canal Street. That was a job some of the male artists liked because you could earn enough money in just one or two nights to live for a week”.

“Organizing the gallery was quick and spontaneous. We used a network of friendships:  some of us knew each other from the open drawing group on Fourteenth Street, some from the Studio School and some from School of Visual Arts .” (And Cooper Union).  Artist Alliance, an organization formed early in 1969,  is sited as an important predecessor to Bowery Gallery; it was a dynamic group of artists who gathered weekly to discuss/ argue issues of contemporary figurative art.

Anthony Santuoso, another early member, described Bowery this way, “It was a gallery of artists …. united by a shared entrepreneurial spirit and, more importantly, a passion for keeping representational painting alive”.

Thurston says, “We were figurative painters at a time when abstract art was more highly regarded. Abstract art was considered more serious, radical… and was truer to the times. Some even thought figurative art had been forever superseded by abstract art”.  Lynda Caspe offers this,   “I think what was really different about the Bowery was that the art was figurative and that was not what was popular at the time”.

Bradford sums it up this way, “What was undeniably true for all (members) was that they were ambitious, knowledgeable artists with a shared interest in representational art who spent their non-working hours in their studios, at artist meetings, arguing and engaging in studio visits not in an academic context, but looking for high level, tough crits from other good painters and sculptors. They wanted to be around the often contentious people who knew a lot about making art and could help… as you struggled with form”.

In the early years Bowery artists were interested in representation and many were,  also,  engaged with narrative painting. The works were based on imagination but life drawings were often used to develop the ideas.  This way of painting,  as with many things in those years,  was debated/ discussed on both artistic and philosophical grounds .

Looking back,  Bradford notes, “Within a very few years, all the particular identity-forming discussions such as working directly from observation vs. building imaginary compositions from studies, or the necessity for a re-engagement with humanism in the current political moment, or the urgency of contemporary vs. allegorical subject matter, or painters who painted the toenails in vs. the full brushed gesture painters, or even the bitter political feuds of the New Left era moved from the Friday night Figurative Alliance meetings into the artists’ individual studios…”

The gallery has come a long way.   Early member Barbara Grossman in an essay  written on the occasion of the 25th anniversary said this,  “One of the main achievements of the gallery is that we have survived and evolved with our principles intact”. “Figuration or representation is not necessarily the criterion—–quality is”.   She believes, “Bowery Gallery has placed its priority on the expression of a visual language through formal means”.

No history of a NYC gallery can be complete without a mention of real estate.  The first gallery location was 299 Bowery (hence our name). Thurston says,  “We chose a space on the Bowery because there was a gallery across the street, the Star Turtle Gallery, and we thought upper Bowery might become a gallery destination neighborhood. The space cost about $200 a month”. Members worked together to renovate the space which included laying down a new floor. Several early members had good carpentry skills!

Photo of group in 1971 in front of the first gallery location.

Thurston tells a story about this photo,  “Taken in front of the gallery the last year we were on the Bowery, you see a funny shape in the background because we found the windows broken and since we did not wish to buy new glass, member Frank Smullen fitted plywood to stabilize the remaining glass and let a little light in”.

Since its inception all gallery business has been carried out by the artist-members.

In honor of the 50th anniversary,  the gallery is mounting an exhibit entitled, “Manifesto, 50 Years On” highlighting the work of current members. It is  Dec 26 – Jan 26.

The catalog for this show can be accessed on the link below. 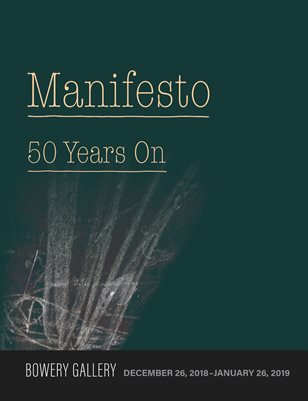 To see more work by the featured artists:

Nicolas Colao, Tony Siani and Myron Heise, early members whose work is included in this blog,  are deceased.

Background on Myron Heise and his work can be found on these links:

**written by Diane Drescher with special thanks to Sam Thurstan and John Bradford for contributing  their writing and anecdotes and for reaching out to the early Bowery artists.